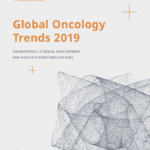 A record number of new oncology drugs has been approved in recent years, bringing new treatment options to patients. However, despite robust levels of pipeline activity, oncology remains a challenging area for research and development. This report examines the productivity and output of the oncology pipeline, new treatment mechanisms, and which patients will likely benefit from new therapies. Our research brings into focus the amount spent on oncology medicines globally, clinical trial activity, complexity and success, and the outlook through 2023.

The report also addresses shifts in therapy use with the emergence of immuno-therapies, Next-Generation Biotherapeutics and biosimilars.

Report Summary
A record 15 new oncology therapeutic drugs were launched in 2018 for 17 indications. Over half of the new therapies are delivered as an oral formulation, have an orphan indication or include a predictive biomarker on their label. Recently introduced therapies are also being used more broadly across varied tumor populations and in earlier lines of therapy. The use of immuno-oncology therapies has doubled in the United States since 2017 and treatment with novel CDK 4/6 inhibitors for HER-2 negative breast cancer has dramatically increased in the United States and Europe.